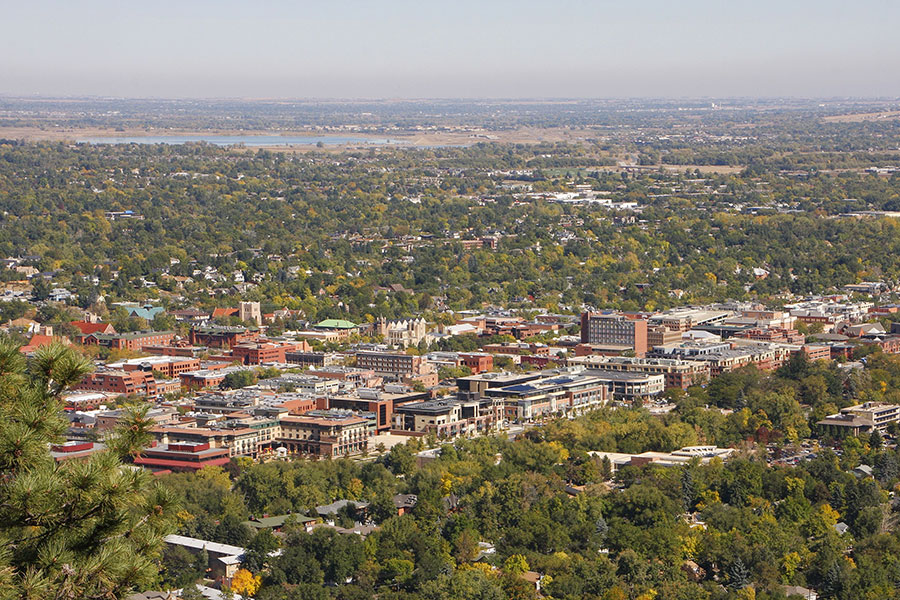 In Part 3 of our Love Thy Neighbor[hood] series, First Bite and local real estate agent Karen Straus have teamed up to tell you all about living and eating in Central Boulder (The Hill, Downtown & Central Boulder) and Lafayette. Just joining? Read Part 1 on South Boulder and Louisville. Then read Part 2 on North Boulder, Gunbarrel, Niwot, and Longmont. 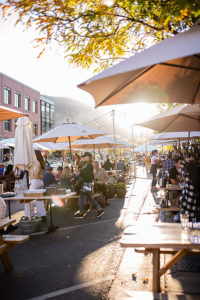 “Central Boulder” is really the broad central swathe of Boulder—running West from the mouth of the Canyon, following Boulder Creek as it babbles East and turning down Arapahoe and through the Goss Grove neighborhoods, campus and then back north towards Pearl after it crosses the Foothills Parkway. In an attempt to highlight all of these neighborhoods, here’s a taste of Downtown, The Hill, Goss-Grove, and East Arapahoe.

Boulder’s original downtown area remains as charming and desirable as it was when it was built at the turn of the 20th century; perhaps even more so. The vibrancy of the Pearl Street pedestrian mall attracts locals and tourists of all ages, and the majestic Flatirons loom to the west as a perpetual reminder of the vastness of the Rockies. A bustling nightlife adds a cosmopolitan flair and attracts high end restaurants and fine dining alongside the staples of quick-lunch options for the nearby office buildings. Downtown Boulder has a reliable listing of all the restaurants in this area, keeping track of the constant openings and closings.

If you’re looking to live downtown, stone cottages, modest bungalows, towering victorians and simple Craftsman homes are just a few of the many diverse architectural styles one can find. With some exceptions, downtown Boulder is generally far enough from the University crowd to provide some buffer from late night parties and noise, making it a desirable location for families. 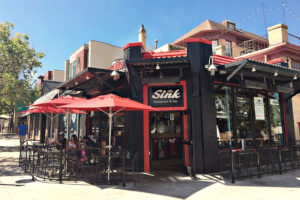 The Hill serves as a secondary downtown area and has a thriving scene of its own. Just west of the University of Colorado, it is home to a variety of restaurants, music venues and businesses supporting the student population that lives nearby. Top of the list of must-visits is The Sink. From the iconic ceiling that captures generations of graduates to the celebrities who have crossed it off their Boulder to-do list, The Sink is a favorite stop for locals and visitors alike. Restaurants like Boss Lady Pizza, The Corner and Alpine Modern Cafe serve up reliable and delicious fare. The Fox Theatre is a world class music venue that has had some of the most talented artists grace its stage for over 30 years. 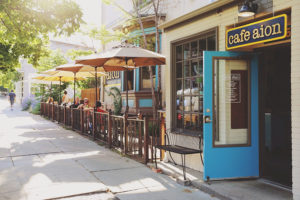 Whether it’s before a concert, or before a performance at the nearby Mackay Auditorium or Mary Rippon Theater, the best place to grab an elevated nosh and glass of wine is Cafe Aion. A twelve-year old cafe that serves up Spanish tapas, killer paella and a bespoke brunch, Cafe Aion is another must-visit.

Wedged between campus and the mountains, The Hill has some of the oldest homes in Boulder, though many of the larger Victorians and Tudors have since become fraternity and sorority houses. Still, if you’re looking for historic charm, this is the place to start. Many of the homes have large trees and elegant patios and proximity to trails at Chautauqua Park are nearly unmatched. On the weekends, the crowds ascend to Chautauqua for a picturesque hike—and you may see some of us with our families first grabbing breakfast at the renowned Rosenberg’s Bagels & Delicatessen to bring along for a pre-hike picnic. 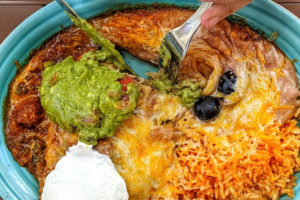 Just south of downtown lies a narrow section of homes tucked in between Canyon Blvd and Arapahoe Ave and bordered by 15th St to the west and Folsom St to the east. Look at an overhead map of this neighborhood and you’ll see why it’s uniquely quiet: it was designed with almost no through streets, keeping the traffic limited to locals only. Goss-Grove (named for the two east/west thoroughfares that exist only in this one neighborhood) also features tree-lined streets and a handful of pocket parks, making this tiny strip of Boulder a great fit for many types of households. While the neighborhood is bordered by some smaller condo buildings, the interior features older Victorian houses and Craftsman bungalows from the early- to mid-1900s, some of which have since been divided to better accommodate student renters.

Just adjacent to the Goss-Grove neighborhood is The Village Shops, a number of hotels and the infamous McGuckin’s Hardware Store. A major shopping center for locals, The Village has breakfast options like Woodgrain Bagels and The Buff Restaurant where you can satiate every pancake desire and lunch or dinner locales like Efrain’s of Boulder Mexican Restaurant, known for their authentic Mexican platters and spicy flair, and Rincon Argentina, Boulder’s best empanada spot for either dining in or taking out trays of frozen puffy goodness to cook at home.

Head east down Arapahoe Ave where you can find luxury condos at The Peloton, a complex built starting in 2006 that features units with modern interior finishes and resort style amenities like a rooftop pool, hot tub, movie room, clubhouse and full gym. The Peloton is also home to Basta and Dry Storage, two concepts from James Beard-nominated Chef Kelly Whitaker. For over a decade, Basta has humbly served up the best wood-fired pizza, whole fish and some dazzling cocktails. Dry Storage began as a bakery and mill, serving up to-die-for baked goods with their own heirloom grains, and now has evolved to regularly have onigiri, pizza squares and more small dishes for all day munching.

Continue east past Foothills Parkway for Boulder’s best butcher and another renowned Chef: Top Chef winner Hosea Rosenberg’s Blackbelly. The butcher shop is only open M-F and has the undisputed best cuts in Boulder. Insider foodies know that they also serve incredible breakfast burritos, and only on Fridays: epic donuts! The restaurant has been a staple since it opened, welcoming guests into the warm restaurant for their exceptional dishes. Tucked into the warehouses behind Blackbelly, is Vapor Distillery, the maker of the award-winning Boulder Spirits. Still a secret to some, this tasting room is always open for a visit and a great place to taste their newest spirit and buy direct from the maker. 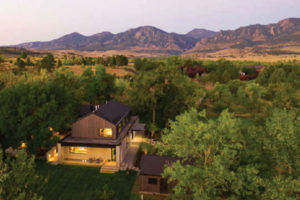 In this east Arapahoe neighborhood you will find contemporary builds on large lots in Arapahoe Ridge, speckled with parks and bike paths throughout the neighborhood. If you really want a rural feel, head down the Cherryvale corridor for a dash of unincorporated Boulder with acreage, farms, creeks, and incredible custom builds side-by-side with original ranch homes. The nearby Bobolink trail is flat and follows the babbling South Boulder Creek, popular with joggers pushing strollers. When you’ve had enough, jog straight to the East Boulder Rec Center for a swim or check out a yoga class in this excellent facility. 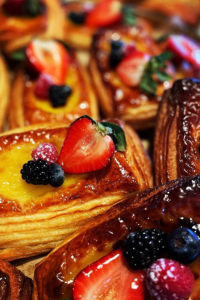 As you keep on heading East you’ll enjoy the rolling hills of Open Space and farmland that skirt north of Louisville and into Lafayette. One of the first main intersections is Araphaoe and 95th, where you’ll find the YMCA, and a bustling collection of businesses. In here, is Westbound & Down Mill, Reelfish & Chips and a new French bakery, Jeannot’s Pâtisserie and Bistro. Jeanott’s is unassuming and quaint, until you reach the glass counter absolutely dazzling with pastries. Be sure to grab a pain au chocolat (or three!), but you’re transported to Paris when you take that first bite of quiche lorraine or bite into a salad niçoise. Head south on 95th and then further east on Baseline and you’ll get into the heart of Lafayette a bit more.

Lafayette offers a wide range of attached homes in all shapes and sizes. A 2- to 3-bedroom townhome with a basement and a 1-car garage that backs to open space that would still be considered more affordable than surrounding areas. The area around downtown Lafayette offers the more historic homes, some of which are in original condition and many others which have been beautifully renovated. Compared to downtown Boulder, there are still many options for renovating an older or historic home in Lafayette. To the west are 80s builds, such as bi-levels and basic ranches, with smaller footprints and more affordable price tags. 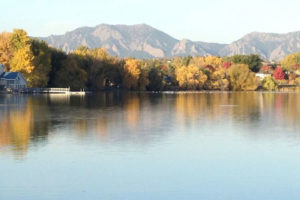 Nearby Waneka Lake features walking trails around its perimeter and the Greenlee Wildlife Preserve where you can learn about local bird watching. The playground makes it a popular spot with groups on the weekend. The surrounding neighborhood has 70s era bi-levels but the draw of the lake has brought many-a-buyer with an eye for rehab. Head to Indian Peaks for a golf course community and more traditional architectural styles from the 80s and 90s, or snap up a charming patio home in Anna’s Farm, where alley garages make the neighborhood seem as though it’s made up of darling dollhouses. 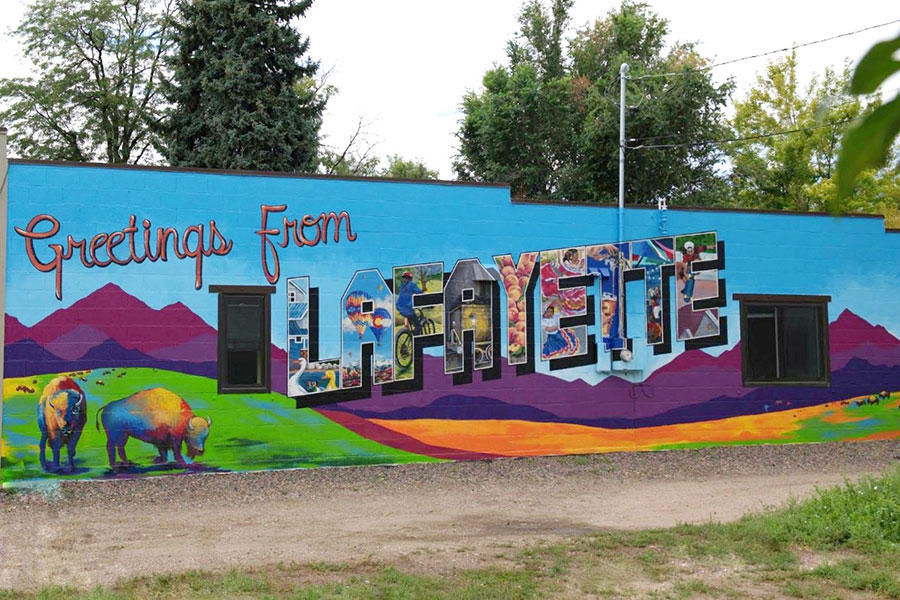 Old Town Lafayette has experienced a bit of a renaissance in recent years, and the real estate market has quickly followed suit. Don’t underestimate the draw of this town: the downtown strip is teeming with trendy restaurants, bakeries and boutique shops, and if you stroll down S Public Rd on a Friday or Saturday night you can feel the lively energy emerging from locally owned bars and restaurants. Teocalli Cocina literally grabs your attention with their colorful decor and lively Mexican cuisine, while Ghostbox Pizza sits a bit back from the street welcoming you in for Detroit style (or woodfire oven) pizza. Lafayette hosts an “Art Night Out” on the Second Friday of every month, closing part of the main drag to showcase artists and vendors and featuring food trucks and live music. Casian Seafood has grabbed the attention of locals, and of foodies around the state with their take on Asian Cajun Food. They were named a 2022 James Beard Award Semifinalist for “Best New Restaurant” thus making it a must-try.

That’s a wrap on our Boulder County Love Thy Neighbor[hood]. From the north side of Longmont to the western edges of Lyons and Nederland, down south through South Boulder and back east through Louisville and Lafayette. Our corner of the world is packed with unique neighborhoods, a variety of housing options and just the right amount of vibe and culture. We are pretty proud of it!

If you’re interested in learning more about homes in these neighborhoods please contact Karen Straus with RE/MAX of Boulder at [email protected].